Do you have areca nut trees (pokok pinang) in the area where you live? Or in your own garden? I am referring to the variety that is called the ‘betel nut palm’ or pokok pinang sirih (PPS). This is the only areca tree whose fruit (areca nut) is used in betel chewing (makan sirih).

By the way, do you like areca nut trees? I have 6 such trees in my compound.

Five of them are right in the front part of my garden. These trees are about 8 years old, and 8 meters high. Everybody in the family is supposed to own one tree each - Temuk, wife + the 3 children.

(2) A row of five areca nut trees in my compound.


But, I think I’m the only one who can claim to have 'blood ties' with these 5 'arecas'! I’m the one who grew these trees, and looked after them until they began fruiting. And I'm still the care taker, until today. All my children are no longer staying with me now, conveniently forgetting these lovely plants that they are supposed to own and nurture!

The 6th areca tree adorning our garden - the youngest, healthiest and already fruiting too, is located close to our neighbour’s retaining wall. This particular tree embarrasses me at times, because it likes to shed off its old frond into my neighbour's compound. At times I would notice the frond lying on the ground, and I would quickly and quietly use my rake to fish it out. But, sometimes, my neighbour snatches it away before I even realize it. Malulah! But I also collect his palm fronds that fly into my area.

(3) My youngest areca nut tree. It’s safely guarded by a bunch of two different kinds of palm trees. Can you recognize them?

It was unfortunate that I had to chop down one recently (otherwise I’d have 7 altogether) because its fronds had been bothering our TV reception.

(4) Parts of the areca nut tree cut down recently.


Why did I grow the areca nut trees in my compound?

It's just because I wanted to have some ‘traditional’ trees around me, those that people in the past used to plant within the compound of their kings' palaces, and those that my kampung people used to grow around their houses, as ornaments, and for certain pragmatic reasons.


By the way, I also have other kinds of palm trees growing in my house compound (pics below).

(5) Other kinds of plam trees that I grow. Do you know their names?

And my front neighbour too grows the areca trees around his house (pic below). One of them is the pretty and expensive bottle palm.

(6) My neighbour's palm trees. Which one is the bottle palm? Can you recognize two other types of palm trees here?

The areca nut trees that I now have in my compound are a constant reminder of the good old days and sweet village life that I had gone through, some 40 years or so ago. The areca nut trees, then, were a significant part of our life, although I must admit, we were highly dependent on coconuts for our livelihood.

I can still remember how my late mother haphazardly planted the areca palm seedlings on our tiny coconut land. That was not done to give a face-lift to the area! The trees were grown for practical reasons. Mature trees were felled when necessary, and new seedlings would be planted in their place.


We’d use the areca tree stem (batang pinang) for making planks for the kitchen washing area. The stem could also be split into much smaller pieces of 'rods' (mengkawan). The mengkawan, normally about 1.5 meters long, was used as the main 'frame' or ‘bone’ for making the nipah thatch (atap nipah). Along the 'bone', nipah palm leaves would be ‘folded’, covering the entire length of the 'bone' itself, and then 'sewn', using finely split bemban skin.

The areca trees also provided us with some additional pocket money. And some fun time too!
We normally processed the ripe areca fruits by splitting them into two halves. The kernels were then taken out. The kernels of some of the fruits could easily be separated from their husk. We called such category of areca fruits pinang lekang. Some of them were just the opposite (pinang tak lekang) - more effort would be required to separate their kernels from the husks.

Areca fruits which had become too ripe and their husk too dry, could produce rotting kernels. These kernels could still be salvaged by removing the rotten parts found in them. The kernels were let to dry in the sun. Dried kernels were sold to the local Chinese shopkeepers for about 30 cents a 'kati' (about 600 gm). 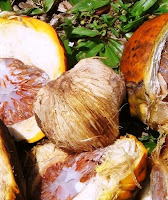 
I also remember using a whole areca kernel for making a smoking pipe head. I would make a hole around the middle section of the kernel. This was supposed to be the area where I'd insert tobacco, normally stolen from my father's 'smoking basket'. At the side of the kernel, a smaller hole would be made through which a tiny bamboo would be inserted, functioning as the 'smoke cylinder' as well as the pipe holder.

(9) The areca fruit husk and a whole areca kernel.


Why did I say that the areca nut trees also gave us some fun time in those days? Here's why.
To celebrate the hari raya in those days, I'd make cannons out of the stem of areca nut trees (meriam batang pinang). These cannons were to be used solely for the hari raya festival. We used 'carbide' to fire these cannons. It was really fun! Unfortunately I can't show you any picture of the cannons here.

But at least you can see in the pictures below how happy my grandaughter was, when recently she had the chance of playing with a sampan tarik (pulled canoe), which was actually an old frond falling off from one of our areca nut trees. Such an old and dry frond is called 'upih' in Malay. Upih is still used today as a special wrapper for dodol, a kind of glutinous rice 'custard' that is very popular among the Malays. .

Can you see my excited grandaughter refuelling her canoe, calling her grandpa Temuk to pull the canoe for her (!), and pulling the canoe herself to transport grandpa's sandals to who knows where? Her excitement reminded me the great moments that my friends and I used to have, playing the 'pulled canoe' around the village which seemed borderless to us.

Our 1st son Izhal & wife Farah have got 4 boys, enough to cause walls to crack when they have their brotherly fights! 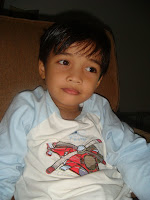 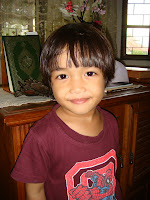 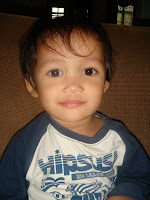 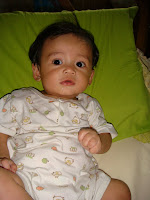 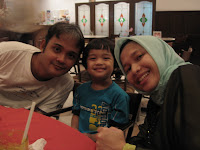 Our 3rd, & only daughter, married about eight months ago, hasn’t got any child yet. Tok Wan & Tok Umi, syabaaar yo!

We are indeed grateful to Allah The Al-Mighty that He has blessed us with so ‘many’ grandchildren. May be more will come, who knows!

I’ve been telling my children to plan well for their families. Family planning is not only about family size, where to stay, or about children’s schooling and expenses. It’s also about effective handling of one's office and home tasks, and about fulfilling specific obligations that one has towards his or her immediate family members, relatives & community, etc. that may affect, or be affected by, the family.

Talking about grandchildren, could there be friends out there, who are my peers (in terms of age), whose grandchildren are already married now? Wow! But the probability is there, right? These friends, their children and their grandchildren, might have married at a very, very young age. At 18 or 19, perhaps?
Posted by Temuk at Thursday, February 18, 2010 28 comments:

DO YOU KNOW IT'S NAME?

You might be familiar with this insect (pics shown below). Anyway, is it an insect? I saw it for the first time yesterday while I was spraying my plant with some liquid fertilizer. It was crawling around the brim of the flower pot. The main body was about 1 inch x o.75 inch. I would love to know the insect's name, sex, favourite food, life span, etc. I left the insect on my 'bemban' tree (first pic) after taking a few snapshots of the creature. 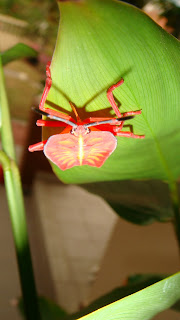 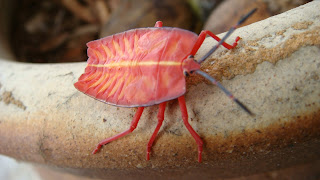 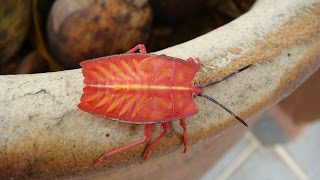 Indeed, the human mind will not know and will not be able to explore all the mysteries of the diverse universe that ALLAH has created. ALLAH is The Creator. It is He alone who knows everything that He has created, in the heavens or on the earth, visible or invisible.

I might be told a lot about that insect. But the knowledge gained would certainly be just like a very minute particle of dust, compared with the knowledge that ALLAH has. But, as He has told us, we should not stop from seeking knowledge, so that we continue to uncover His creations and recognize His greatness.
Posted by Temuk at Friday, February 05, 2010 26 comments: