About six weeks ago, I transplanted a few young bromeliads closer to my bedroom, breaking them away from their rather crowded and poverty stricken colony. I was hoping that the exotic resettled bromeliads would be healthier and develop more vigour, and do what is always expected of other young plants: show off your unique flowers! 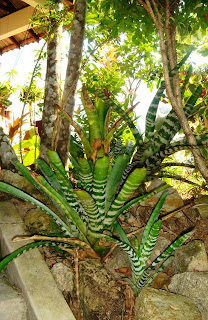 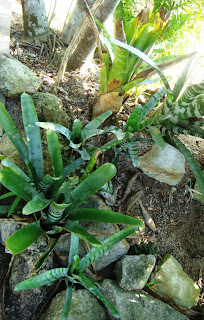 Luck was on my side. Surprisingly, in less than two months in their new place, one of the plants began to develop a small reddish yellow bud-like thing. I was certain, then, that some lovely flowers were already on their way! 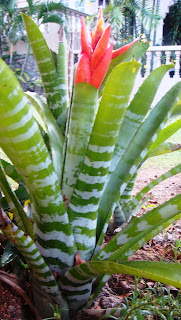 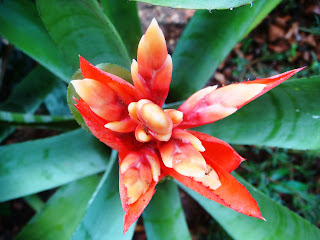 The variety that I grow is the tropical bromeliad, or Tropical Orange Flowering Bromeliad, to be more specific. I don’t know what it is called locally, although I remember that some village people refer to it as Nenas Hiasan (Decorative Pineapple). The leaves of the tropical bromeliad are almost similar to that of the pineapple, except that they are thinner although stiffer. These leaves which resemble long blades are nicely decorated with irregular but beautiful white patches. Both edges of the leaves tend to curve inward a bit, and they are lined with rather unfriendly sharp thorns throughout. 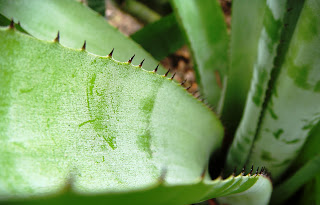 Can I leave it to you to have a good look at the 'blooming' flowers yourself? I may not do justice in explaining to you their real beauty. 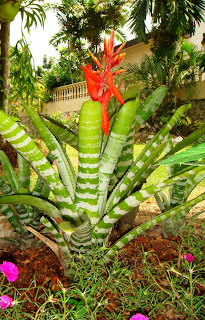 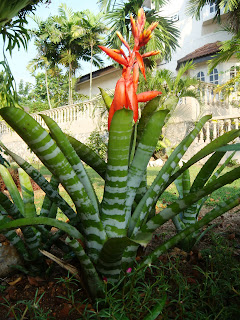 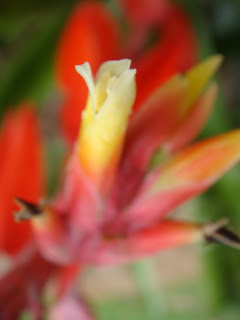 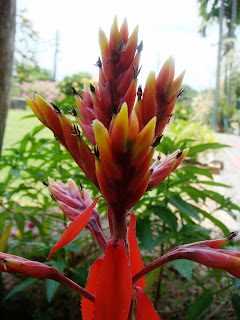 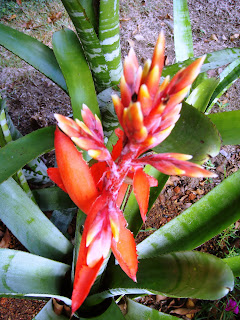 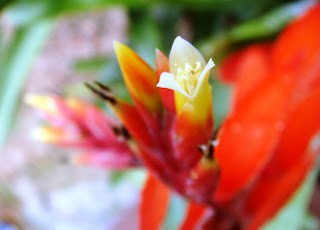 But I can tell you that these bromeliad flowers don't seem to have any special smell. Red ants, however, appear to have a great liking toward them. So, these flowers might be sweet. They do look sweet! 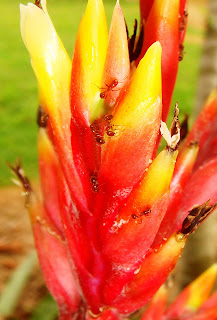 Would you use them as one of your wedding gifts? If you are really going to do it, you might want to remove the ants first.
Posted by Temuk at Thursday, August 26, 2010

Salam Cikgu,
Beautiful. I'm mesmerised by them. Never seen this plant before.

Salam Siti Roffini
Glad to know that you are quite fascinated by those flowers. If you go thru the internet, you'd be able to see many other types of bromelia/bromeliad. The one that I have in my entry is the 'rugged' type. Ca't you find bromeliads at the nurseries around your area?

Temuk, thanks for sharing this unique plant and its flower. I have see this plant before but this is the first time I get to see it blooming. Indeed a beauty by itself and it does give me joy.

Have a nice day.

Salam Pak Idrus
Glad that you got the opportunity to see those flowers blooming in the virtual world. I am happy that you enjoyed the pictures. Thank you & have a nice day.

today i take my time to go through your previous entries that i missed due to my "absence' recently..

have a nice day..

Salam HJH ZAINAB
You did not miss anything. Thanks anyway.

Hope you'll have a lovely hari raya this year.

C u after raya. Selamat bercuti.

SALAM ISAH
I COULD SEE RIGHT FROM MY VERY FIRST ENCOUNTER WITH YOUR BLOG THAT YOU ARE VERY PASSIONATE ABOUT COOKING. IT WOULD BE NICE IF I COULD GO TO SARAWAK THIS HARI RAYA AND SEE (OF COURSE MAKAN JUGA) ALL THE DISHES THAT YOU'D LAY ON YOUR TABLE!

CikGu Temuk,
Yourbromeliad looks magnificent. The color is bright and beautiful. How long will it last?
Selamat Hari Raya.

Salam AnaSalwa
Thank you for dropping by. I agree that this particular bromeliad exhibits bright and beautiful color. I was told that the flowers will start to wither after about a month or so.

Cikgu,
I am fascinated by your knowledge in these exotic and rare plants. They are rare to me because I cannot recall having seen one. I will ned to come for help to you to identify a green leafy plant with long leaves, each about a meter long, ending with sharp thorn. Instead of a flower stalk like the ones shown in your picture mine has a stem, a long bamboo like post rising up to about 3 meter long. It is still rising with small branches of flowers appearing every half a meter or so. I know it is impossible to describe it properly. I had a couple of seeds givem to me about seven years ago. Only about a month ago this strange bamboo like stalk began to shoot from its centtre. I have been thinking of posting a picture in my blog for knowledgable readers to help identify it. If you allow me to e-mail you a picture would it help?
Pakcik Hassan

Salam Sdr Hassan
Frankly, I do not know much about plants. To ascertain the names of plants, I would normally go to Yahoo! Search, and look for, for instance, "palms", "exotic plants", "thorny plants", etc. I am also using the books by Ong Hean Chooi (Utusan Publications & Distributors Sdn Bhd) - on Tanaman Hiasan, Sayuran, Rempah Ratus, etc. as my references. I must say that Ong's directories of plants are not exhaustive, but the books do help to a certain extent.

I would also like to recommend you to visit Adry@Daun's DEDAUN ALAM blog at http://adrydaud.blogspot.com. I really love reading his entries on plants and find them very informative.

You are most welcome to email me the picture of your plant. Based on your description, I think it is the same plant that I used to have sometime ago, which I called Kelompang Telur Tinggi (of course, that's not the correct name for it!). You might also want to check at http://wikipedia.org/wiki/Agave_angustifolia. Could it be "Carabian Agave"? My email add is abhalin48@yahoo.com.

Have a nice day!